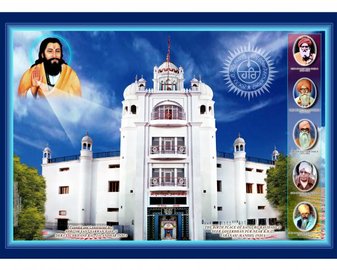 It has become a cherished dream of followers of Guru Ravidass Ji from the world over to pay their obeisance at  Shri Guru Ravidass Janam Asthan Mandir at Seer Goverdhanpur Varanasi at least  once in their life. They now view this Mandir as their religious headquarters. Although Guru Ravidass Ji lived in the city of Varanasi for more than 151  years,  there did not exist any place devoted to his memory untill the sixties of the  twentieth century. The reasons were more of a social nature than the historical  or religious ones.

An overwhelming majority of the  people throughout the world believe in God and as a corollary follow one  religion or another. Hinduism is considered to be the oldest religion in India.  It has a rich tradition of great philosophical thought. Unfortunately the  Chaturavarna-system in Hindu religion is also almost as old as the religion  itself. It is supposed to be based on one Shloka known as “Purush Sukta” in the  Rig Veda-the oldest scripture of the Hindu religion. According to this system  the Hindu society was divided in four castes. In the initial stages it was  divided according to one's profession, but later the division became rigid based  on birth alone, mainly because of the laws given by Manu for the governance of  society. The people belonging to four castes  were, as per Dr. Ambedkar, like people living in four vertical rooms one above  the other, not connected by any stairs. The caste system suffered some setback  with the emergence of Buddhism in India, but Buddhism faded from India with the  resurgence of Hinduism as a result Shankracharya’s efforts. Therefore the caste  system became deeply rooted again. According to this system, the people of the  top Varna i.e. the Brahmins alone were having worship rights. People of the  fourth Varna i.e. Shudras were strictly prohibited from performing any kind of  worship. It was under such prevailing circumstances that some great saints  belonging to the fourth Varna revolted against the prevailing system. They  proved with their devotion that God is pleased with those who have true faith in  Him & worship Him from their hearts. Saints of this era such as Satgur  Namdev, Satgur Kabir Sahib and Guru Ravidass all had to face the ire of higher  caste Brahmins for their devotion to God, but all of them not only overcame this  opposition, but they also became famous during their lifetime  itself.

Varanasi is known to be the city of  Lord Shiva. It was this city where two great saints of Bhakti Movement i.e.  Satguru Kabir & Shri Guru Ravidass Ji were born. Shri Guru Ravidass Ji was  born in the year 1377 AD i.e. Bikrami Samvat 1433 (widely accepted by most  scholars & institutions) to father Shri Santokh Dass Ji and Mother Kalsa  Devi Ji in a humble family. Guru Ravidass Ji exhibited spiritual traits from  childhood itself. His father married him at any early age. He started doing his  ancestral profession i.e. making leather shoes.

He started propagating these  spiritual ideas among the people. His popularity increased day by day. Soon  Kings and Queens of different princely states became his disciples. Raja Nagar  Mal of Banaras (Varanasi), Rani Jhalanbai and Miranbai of Chittaur were some of  the well-known disciples of Guru Ji. Guru Ravidass Ji devoted his attention to  preaching equality and brotherhood of humankind. His efforts were coupled by his  contemporary saint in Banaras (Varanasi) Satguru Kabir Ji.

There is a detailed account of the  kind of beautiful palaces in which Shri Guru Ravidass Ji used to live in the  book “Anant Dass ki Parchayan” when Rani Jhalanbai came to meet Guru Ji. But  after the life of Guru Ji no trace of any place accredited to the memory of Guru Ji was found in  Varanasi where he is believed to have lived for about 151 years. This remains a  mystery of history. The sacred task of perpetuating the  memory of Guru Ji at Varanasi and giving a befitting memorial in his name was  undertaken by the spiritual, visionary & revolutionary saint Shri 108 Sant  Sarwan Dass Ji of Dera Sachkhand Ballan. He made strenuous efforts to make Bani  (sacred writings) of Guru Ravidass Ji popular among the socially backward and  downtrodden people. He thought his job to be incomplete until the place where  Guru Ravidass Ji gave the sermon of Begumpura was traced out and a suitable  monument built there. Swami Sarwan Dass Ji assigned this task to a selected  group of people under the guidance of Sant Hari Dass Ji. The group went to  Varanasi and surveyed the area near the Banaras Hindu University. The imlee tree  and other indicators confirmed a location in village Seer Goverdhanpur, in the  outskirts of Varanasi near BHU (Banaras Hindu University), as the birthplace of  Guru Ravidass Ji. The plot of land was purchased and no time was lost to start  construction of an impressive temple. The foundation stone of this Mandir was  laid on Monday the 14th June 1965 on Ashad Sankranti day by Sant Hari Dass Ji,  along with a large number of devotees of Dera Bal, specially deputed by Sant  Sarwan Dass Ji for the purpose. Once the foundation stone was  laid, there was no looking back. A large number of sewadars were sent to  Varanasi under the stewardship of Sant Garib Dass Ji to undertake and complete  the construction. The place was undeveloped, without an approach passage and it  was a Herculean task to manually carry construction material to the site from a  considerable distance. Notwithstanding the adverse conditions, the Sewadars  devotion to the Guru, dedication, the cause and their aspirations surmounted all  this. In this endeavor, help came from public at large from within as well as  from outside the country. The Guru’s devotees residing in U.K. and other foreign  countries were also keen to see the project completed and contributed according  to their respective individual capacities. The first phase of the temple was  completed in 1972. Many Saints representing the Shri Guru Ravidass Sadhu  Sampardai Society of Punjab accompanied Sant Garib Dass Ji to Varanasi for the  inauguration ceremony. A Murti of Guru Ravidass Ji was installed in the Mandir  on this occasion. Simultaneously a Murti of Sant Sarwan Dass Ji was installed in  the Mandir as a token of recognition of his
contribution in giving our community  an elegant Mandir at the birthplace of Guru Ravidass Ji.

In order to manage the multifarious  affairs of this Mandir a Trust by the name  “Shri Guru Ravidass Janam Asthan  Public Charitable Trust” was constituted with the Head Office at Dera Sant  Sarwan Dass Ji, Vill. & P.O. Bal, Distt.Jalandhar and Branch Office at  Janam Asthan Mandir, Seer Goverdhanpur, Varanasi UP. Till date the Trust is  managing the affairs of the Mandir and its associated activities. It has become  a mission for the saints of Dera Sachkhand Ballan to develop in every possible  way this Janam Asthan Mandir so that it acquires the status and magnificence  which a Mandir at the birthplace of Guru Ravidass Ji deserves. The Trust  undertook additional construction work at the Mandir in the year 1993 and the  completion of second phase of the Mandir culminated in the installation of a  golden Kalash, atop the Mandir dome on 7th April, 1994 by Babu Kanshi Ram Ji  (President of Bhajun Samaj Party), in the presence of Sant Garib Dass Ji and a  large number of devotees.

Shri 108 Sant Sarwan Dass Charitable Trust (Regd.) U.K. expressed the desire of having a monumental Gate in the memory of Guru Ravidass Ji in Varanasi City at some prominent road leading to the Mandir so as to perpetuate the memory of Guru Ji. This project was again  undertaken by Mandir Trust under the Chairmanship of Sant Niranjan Dass Ji. A huge Gate at Lanka Crossing was built in a very short period. It is a matter of great pride for our community that the gate was inaugurated by the then Honourable President of India Shri K.R. Narayanan on 16th July, 1998. A large number of Guru Ji’s devotees and saints from Punjab and other states Were present on the occasion along with Sant Niranjan Dass Ji, Sant Rama Nand Ji and Sant Surinder Dass Ji.

In order to cater to the convenience of pilgrims to the Mandir, the Trust has acquired an Ashram for their stay. Now a new  four-storey building has been constructed in this complex-each storey having 11 rooms with attached bathrooms. The Trust has also built a huge Langar hall, for serving free food to visitors to the Mandir. With the growing  popularity of this  Mandir and also keeping in view the increasing number of pilgrims, the U.P.  Government also thought of raising suitable memorials for Guru Ravidass Ji in  the city of Banaras. It has built a beautiful Shri Guru Ravidass park and stone  sculpture of Guru Ravidass Ji at a prominent place at the river “Ganga”. A large  Guru Ravidass Ghat has also been built at this place. The new bridge over Ganga  near the Mandir has been named Shri Guru Ravidass Setu.

All the followers of Guru Ravidass  Ji throughout the world will remain indebted to Sant Sarwan Dass Ji and his  successor Saints of Dera Sachkhand Ballan for giving them this place of  pilgrimage. People visit this temple throughout the year, but they consider it a  privilege if they can make this pilgrimage on the occasion of Birthday celebrations of Guru Ji. People in very large number from all states of India as  well as from many foreign countries assemble on this occasion to pay their obeisance. A special train is run from Jalandhar to Varanasi on the occasion.

The Janam Asthan Mandir of Guru Ji at Seer Goverdhanpur, Varanasi  has now acquired the status ofBegumpura (serenity) for Guru Ji’s followers and  has become an Ultimate Place of Pilgrimage for them.